A new report from CompStak takes an unbiased look at the fourth quarter of 2013 as well as the entire year to reveal office rent trends in one of the nation’s most active and pricey commercial real estate markets.

Manhattan’s overall effective rent, which includes not only the actual rent but also landlord concessions, increased 5.08% since 2012 and recorded the best performance since 2008. The top of the market kept charging forward with transactions over $100 Per Square Foot, such as Och-Ziff’s renewal in the second quarter. Transactions over $100 represented  4.2% of the total transaction volume in 2013.

In Midtown Manhattan, home of the world’s richest financial services companies, the average effective rent for class A office space reached $66 PSF. Nearly 57% of the leasing activity in Q4 was consisted of new deals, indicating a healthy market, and continuing the trend for the year.

Perhaps the most impressive growth was recorded in the Downtown market. Still known as Manhattan’s most affordable office market, Downtown’s effective rent increased 15% since last year, and reached $40.03 PSF, mostly due to a flurry of large transactions in class A buildings, such as Jones Day’s 330,000 SQFT new lease at Brookfield Place. 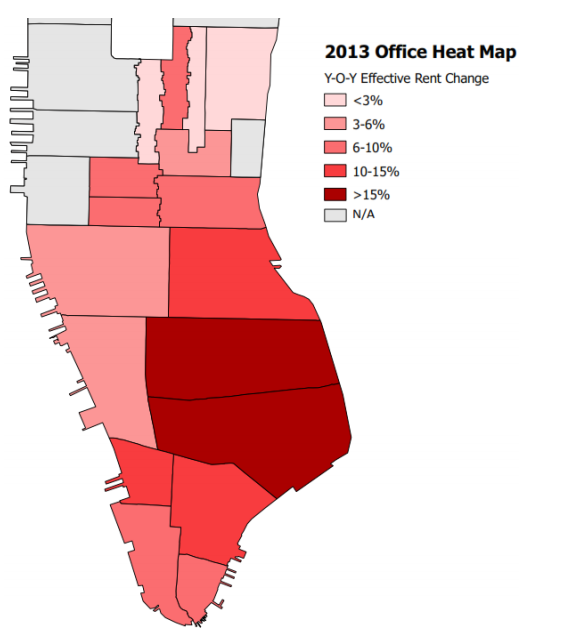 In Midtown Manhattan the spread between asking and starting rent remained very narrow at about $3 PSF for class A buildings. In Midtown South and Downtown the rent spreads continued to shrink. Narrow spreads usually mean strong demand and a favorable environment for landlords.