To download a PDF version of this report, click here: Booming Office Rent - A Tale of Two Markets

Average office rents in San Francisco and Manhattan are closer than you think- and getting closer.

Recently, Jones Lang LaSalle caused quite a stir when it announced that the Bay Area’s Sand Hill Road was the most expensive street in the United States for office space. Does this mean Manhattan has given way to a new leader in pricy office space? 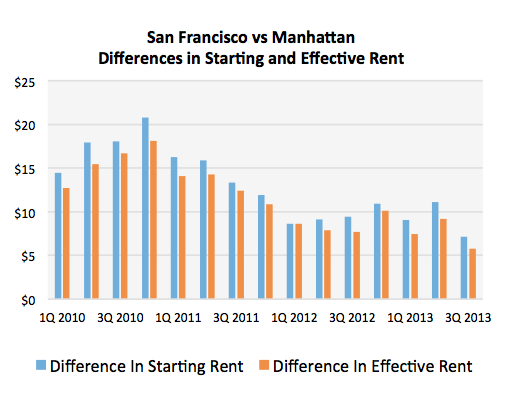 For now, the answer is no- average starting office rents are still higher in Manhattan. The difference between markets is even more pronounced at the top, with the upper quartile of Manhattan office rents a full $20 more expensive than the top quartile of San Francisco rents. But New York landlords shouldn’t feel too comfortable on top. While average rents are converging quickly, differences in the tenants and the markets themselves may mean that San Francisco and New York are more alike than their starting rents suggest.

A big reason for this discrepancy is that the tenants’ particular industry changes the market dramatically. Manhattan is typically home to stodgier industries such as finance and legal services while growth firms and tech startups are more commonplace in San Francisco. Manhattan’s more established firms sign longer leases (about 7 years, on average) compared to San Francisco’s average lease term of just over 5 years.

These longer leases have built- in premiums that drive market prices up. The various risk premiums on Manhattan leases with terms 7 years and longer average 13%. In taking these numbers into account, the difference between Manhattan and San Francisco rents declines by 33% to less than $7 per square foot for 2013.

Consider the curious case of Manhattan’s Midtown South, the area known as “Silicon Alley” that caters to tech startups and other growth firms. Rents have been growing quickly, 24% since the beginning of 2012, and firms sign shorter leases for smaller space, similar to San Francisco’s tenants. Compared to Midtown Manhattan leases, this year’s Midtown South leases have about 26% fewer months of free rent and 37% smaller tenant improvement allowances. A quick look at the graph below shows that Midtown South’s starting rent trend since 2007 is much closer to San Francisco’s starting rent than to the adjacent submarket, Midtown Manhattan. In fact, Midtown South’s rent trend since 2007 correlates with San Francisco’s rents at a whopping 88%. Tenant industry is important indeed.

To be fair to New York, retail space is astronomically expensive- much more so than in San Francisco. But as San Francisco rides the fast growing technology industry to higher and higher rents, New York’s perch atop the commercial real estate ladder may soon be wobbling.

*** based on a report written by CompStak research analyst, Rob Maxwell (pictured).