At CompStak, we sure know how to treat our users. Last week we offered two US Open men's finals tickets to the first CompStak community member to claim them. We knew our users were some of the most responsive real estate professionals around, so we were not surprised that within minutes our inbox was overflowing with requests. (For those who offered gift cards or their first borns - the only bribes we would consider are in the form of lease comps.) And the winner was... Colliers' Michael Thomas! He and his girlfriend (the famous Katy Whyte of the Clinical Pharmacology Dept of Columbia University) got two prime tickets to The Open, and even better they received two limited edition super sweet black CompStak t-shirts!
Here are Michael and Katy in their totally awesome, super sweet and very stylish CompStak swag: 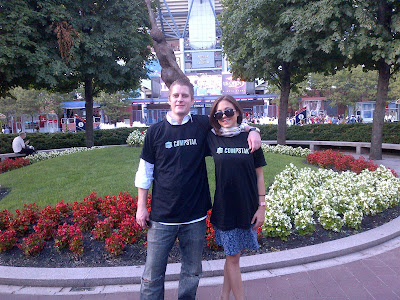 Here's Michael's impression of the open in "his own" words ("his own" is loosely interpreted).
"I knew that the totally sweet CompStak t-shirt would imbue me with great ninja like power.  What I did not realize, was that with this great power would come great responsibility.  As a CompStak ambassador I was asked not just to watch the matches, but also to will Andy Murray to a win in the longest U.S. Open finals match in history."
When asked if he used the powers of CompStak to influence Djokovic's injury during the match, Thomas flatly denied that he would use the CompStak powers for bad.  "I realized when I was given these powers, that I could use them for good and for evil.  I know that the CompStak mission is to bring good to the world of real estate and doing so means winning fair and square."
For more awesome CompStak giveaways, keep watching our blog, Twitter, Facebook and email.  We love our users, and we're proud to show it!