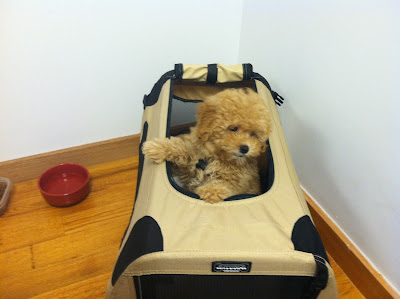 CED & Director of Customer Relations - Squeakers - In His Office[/caption]

We've never used the CompStak blog to announce a new hire, but there's a first time for everything and this employee is worthy of a special announcement.

So now, without further adieu, we announce the latest edition to the CompStak team, our CED (Chief Executive Dog) and Director of Customer Relations - Squeakers.

Before we tell you more about Squeakers and describe his duties,  we would like to dispell any rumors and speculations related to his hiring.  Yes, it is true that Squeakers is below the "legal working" age, and yes he is being paid below "minimum wage."  However, our esteemed counsel at Wilson Sonsini has advised us that Canis Lupus Familiaris are exempt from both of these laws.  Nonetheless, CompStak has gone above and beyond in supporting the needs of our latest employee by providing free room and board in NYC as well as unlimited free meals and treats (tricks may be required).

While we received many applicants for the position, we believe that Squeakers is absolutely the best fit for the job.  For your reference, below is the official list of job responsibilities:

Candidate will report directly to the CEO and shall be responsible for the following:

A Little About Squeakers:

Squeakers was born on May 20, 2012 in Flemington, NJ.  He comes from a small family, and is one of a set of quadruplets!  His mother is a Toy Poodle, and his father is a Maltese.  When not working long hours at CompStak, Squeakers enjoys chasing his tail, napping, playing fetch and taking short walks.

Here is an interview with Squeakers:

CompStak: Squeakers, how have you enjoyed your first couple of days as an employee of CompStak
Squeakers:  Woof, woof, woof, woof.

CompStak: Are you excited about the future of the company?
Squeakers: WOOF!

We hope that you will all have an opportunity to meet Squeakers soon.  You can usually find him at the CompStak office, but he his also available online via his Facebook fan page - https://www.facebook.com/SqueakersMandel.