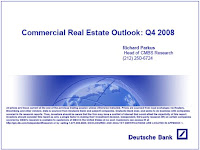 The real story comes on pages 18, 22 & 23.  Page 18 shows the drastic decline in property prices. Declines in prices aren't a big deal for owners that have owned and plan to own their buildings for a long time.  However, many of the country's biggest and most expensive buildings have changed hands in the last couple of years, for top dollar - particularly in NY.  Many of these properties are in trouble as their short term loans are coming due, and the landlords who were counting on ever increasing rents and very low vacancy rates to refinance these properties won't be able to refinance.
In fact, if you look at page 22, you'll see that a huge share of the loans maturing in the next few years are interest only - very scary! The remaining pages show that borrowers are already having trouble refinancing these loans and it's only expected to get worse.
Ultimately, I think that it's fair to say that NY will be hit very hard by the inability to refinance loans.  In a future post I'll explain why in detail, but here's the jist of it.  Buyers of office towers in NYC have bought buildings with increasing small "cap rates" (basically the annual predicted profit margin, or the percentage return per year as determined by dividing the Net Operating Income by the Sales Price).  This leaves very little "room for error." If vacancy rates go up, expenses go up, or rents go down . . . even a little bit, the profit dissapears, the slightest bit more, and the buildings are losing money.  Buildings that bring in less money are worth less, refinancing a building when you owe more than the building is worth is awfully tough!
Without further ado, here's the Deutsche Bank Report.
Here's a great note from my friend Peter - Thanks!:
Don't be so surprised that the loans that are defaulting are the IOs, as IOs are typically bridge/construction which got crushed. Longer term loans typically are likely less speculative in their underwriting. As for the cap rates, what you didn't mention was the idea that said cap rates were "synthetic" and were anticipated to increase as soon as rents rolled. Unfortunatly, due to market conditions, rents have not only not increased as anticipated, but have decreased (perfect storm) which has lowered caps even further (and in turn, caused defaults).