A few months ago I prepared a report on the Manhattan East Side Submarket. Before the information gets outdated, I thought I would share it. So, without further ado . . .

The East Side Submarket is defined as:

- excludes Lexington Ave. and west side of Third Ave. from 39th to 46th St.

As you can see in the chart below, historically East Side rents and vacancy rates track Midtown Manhattan rents in general. 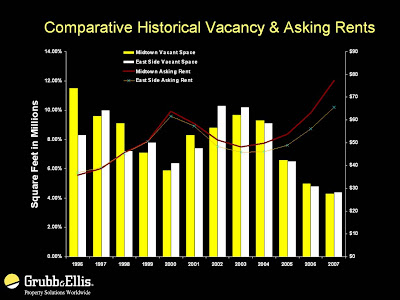 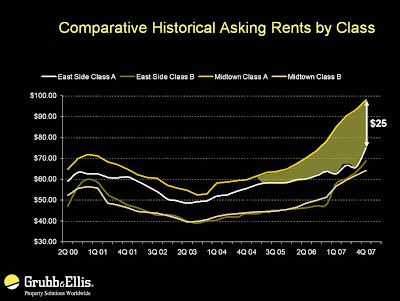 I have some theories for which can account for some of the discrepancy (new class A inventory on the West Side, impact of the Plaza district, etc.). However, I do not believe that there is a good justification for this incredibly large discrepancy. Sure, the East Side does not have the best transportation in the world, but virtually all of the East Side's Class A buildings are on the West border. The point is, that if you are looking for Class A space in Midtown, there is rent arbitrage opportunity between the East Side and the rest of Midtown, and you should take advantage of it!