Once the 8th largest city in the US, Buffalo, NY, fell prey to the hollowing out of manufacturing in America that resulted in vast unemployment and population decreases. Since the start of its decline in 1960s, the city has searched for a silver bullet to solve its economic malaise: one big development to save the city and the economy. After 40 years of waiting for this deliverance, local business people and civic leaders have adopted a different approach to urban revitalization through a process of community engagement.

This new approach has been supported not only by local business people, but also outside investors, most notably Governor Andrew Cuomo and the State of New York. Governor Cuomo’s unprecedented Buffalo Billion plan</a href> has jumpstarted Buffalo’s comeback. In 2012, Cuomo promised Buffalo $1 billion dollars to help spur economic development and growth in the region over 10 years. This long term approach hopes to create an enticing environment for companies in biotech, high tech manufacturing, and innovation to invest in the region.

Another endeavour crucial to the success of the Buffalo Billion is the Buffalo Niagara Medical Corridor. The corridor centralizes Buffalo’s medical facilities for not only patient care, but also research by joining University at Buffalo’s Medical School and Roswell Park Cancer Institute. As part of Cuomo’s Startup NY initiative, UB has designated 276,286 sqft of campus</a href> and incubator space so that startups (and the people who work for them) move to Buffalo. Bio-tech and life science startups are flocking to the medical corridor for use of the state of the art facilities. So far, 35 science start-ups have taken advantage of the programs benefits. Moreover, with a $100 million investment in the Buffalo Institute for Genomics</a href> partnership with the New York Genome Center, the State hopes that the University can develop their supercomputing technology and expand their bio-tech research capacities as a means “to accelerate recent advances in genomic medicine into medical care.”

In some ways these investments have already started to show meaningful returns. The State of NY originally committed $225 million to build a state of the art clean energy facility on a former Brownfield site. Now, with the announcement of SolarCity moving to the Riverbend area, the State has increased its investment to $750 million. SolarCity is the nation’s largest solar panel installer and its chairman is Elon Musk. SolarCity will employ up to 2,900 people with its move to Buffalo. Also, SolarCity will put Buffalo on the solar energy map, becoming the biggest solar panel factory in the Western Hemisphere producing 1000 megawatts of electricity.

Buffalonian investment has also surged. For the first time in decades there are cranes in the sky in Buffalo. Construction of new office buildings and complexes as well as industrial sites have emerged. Local developer and now head of New York State’s Empire Development Corporation, Howard Zemsky, bought and repurposed 3 empty warehouse buildings to create a mixed-use office complex, Larkinville, bringing life back to a desolate urban area. 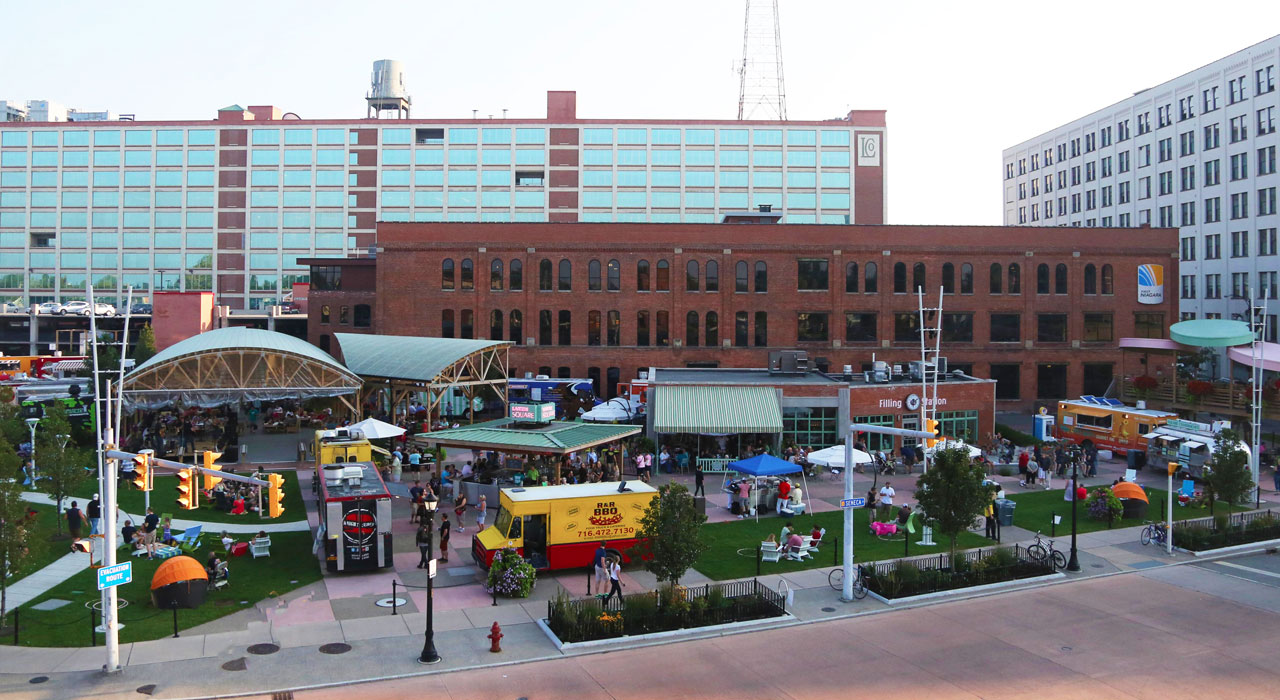 Terry Pegula, owner of both the Buffalo Bills and Buffalo Sabres, has personally invested $172 million in the redevelopment of the area around the Sabres arena. Pegula’s state of the art hockey facility, Harbor Center, is driving more people downtown to the revitalized harborfront</a href> with its outdoor ice rink, concert venue, and parks. More recently, a local businessman purchased $48 million</a href> worth of buildings in the downtown market with plans to turn them into residential condos as well as office and retail space.

All of these efforts have had a strong impact on Buffalo’s residential and commercial real estate markets. There has been a steady increase in housing prices since 2006 and because of the low cost of living (and in particular housing), Buffalo has seen the number of young professionals living in the city rise.

More interesting than the changes in its housing dynamics are the shifts happening in Buffalo’s commercial real estate market:

From these numbers, it is clear that Buffalo’s commercial real estate market is primed for investment as absorption and demand go up, while vacancies decline across space types. Moreover, the market should continue to improve as the Buffalo Billion money is invested in the city.

Everyone wants to read more, but with busy work schedules and even busier personal lives, it’s hard to find the time. CompStak talked to several CRE professionals and influencers about their favorite reads and why they’re worth your time. Here are 12