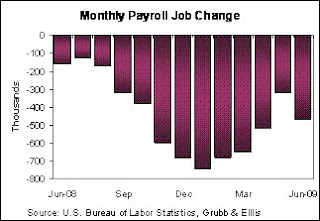 It’s tough to find the good news in this morning’s payroll employment report from the Bureau of Labor Statistics. Employers shed 467,000 jobs (net) in June, ending the four-month string of lessening monthly losses, while the unemployment rate increased a tenth of a percentage point to 9.5 percent. Job losses since the recession began now total nearly 6.5 million. Where’s the good news in that, you say?

- Keep in mind that employment is a lagging indicator and is unlikely to turn around until next year. Today’s report does not change the outlook held by a majority of economists that the recession will end later this year as GDP turns positive in the third or fourth quarters.

- A sluggish recovery should minimize the potential for an outbreak of inflation. It should help keep interest rates and oil prices low, thereby providing some support for consumer spending, the housing market and the financial sector despite the rising unemployment rate.

- A gradual recovery will provide cover for the Federal Reserve to tighten interest rates and withdraw liquidity from the credit markets in an orderly fashion. If inflation were to flare up, the Fed might need to act precipitously, thereby increasing the potential for back-to-back recessions as in the early 1980s.

- Don’t forget that the 467,000 jobs lost in June is a net number. In the third quarter of 2008 (the most recent data available from the BLS), private employers added 6.8 million jobs and eliminated 7.8 million. Of the 6.8 million jobs added, 5.5 million were at expanding businesses, and 1.3 million were at new businesses. Employers are adding new jobs all the time, and eventually, the balance will shift back into the black with more jobs created than eliminated.