It is a commonly held belief among commercial real estate professionals that publicly traded REITs offer their tenants generous lease concessions packages that often includes higher cash allowances towards tenant improvements than other landlords. Due to the lack of transparency in the commercial real estate industry, it was difficult to gather empirical data to study public REIT concession strategies. After collecting data from several markets over multiple years, CompStak can now offer insights into a strategy that has been difficult to measure. 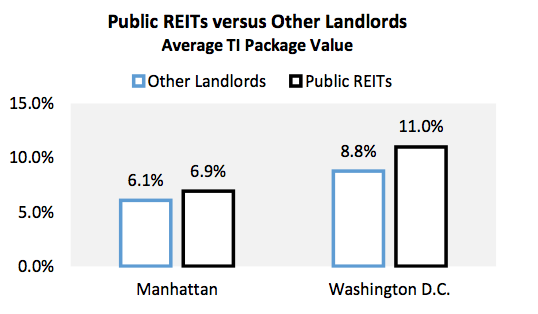 An analysis of concessions offered by Manhattan and Washington DC landlords clearly shows that this belief is true. In our analysis of TI package value, we have adjusted for variation in rent and lease term by presenting TI as a percentage of the total deal value in the accompanying chart. On average, Manhattan public REIT landlords offered TI packages approximately 13% higher than their private landlord counterparts – with TI packages representing nearly 7% of the deal value(1). For a 12 million dollar deal, the monetized difference in TI concession would be close to $100,000. REITs offer better TI packages in the DC office market as well, where public landlords offered their tenant 25% more than private landlords, with TI packages averaging 11% of the deal value in the same period.

The rationale behind the increased TI that is offered by REITs is tied to the REIT capital structure. Public REITs have lower cost of capital because of their ability to raise capital through the stock market and corporate debt sources. These capital sources are generally unavailable to most private real estate owners, and private equity real estate investors usually demand a higher return than public investors. With lower costs, public REITs have the flexibility to offer greater concessions.

More importantly, public REITs have the obligation to disclose their financials. For investors, Funds from Operations (FFO), an item that must be revealed in SEC filings, is a frequently used metric to evaluate the operating performance of a REIT. However, as shown in the table below, FFO has a flaw with respect to one-time, non- recurring expenses such as tenant improvement concessions and lease commissions – it simply does not take them into account. As a result, tenant improvements allowance is a great asset management tool with which REITs can improve the occupancy performance and FFO numbers on the financial statement. The higher tenant concessions can be used to achieve a higher “face rent” and maintain a low vacancy rate.

Besides the commonly used FFO, Adjusted Funds from Operations (AFFO) is also used by professional analysts in REIT evaluation. AFFO adjusts the FFO by considering expenses such as capital expenditures and amortizations. However, when amortized, it is hard to assess the original value of concession based on the financial statement alone. The trade-off between concession and rental income is even more difficult to judge for newly public REITs, who may be adjusting leasing strategy after the IPO.

The ability of REITs to offer greater concessions gives them a competitive advantage that compensates for other factors, such as high visibility and scrutiny by their shareholders. Improved methods of calculations, such as AFFO, that allow better visibility for investors may still not offer a full picture. The advantage and implication of leasing methods on the financial statement are lost in the forest of accounting documents. It is access to information, such as TI allocations, that can unlock the true value of a REIT and contribute to a more efficient market.

***based on a report written by CompStak Senior Research Analyst, Wayne Yu (pictured).