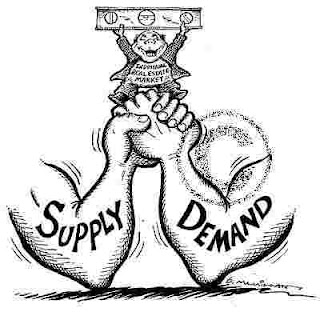 Sixth months ago I mentioned that despite the softening of the NYC commercial real estate market, it was still a landlord's market for small tenants.  In my post, I predicted that it would be a little over a year before the market really softens for small space, and a year and a half before small tenants start making deals significantly below existing market prices.

However, as anyone can see, the financial crisis that our world, our country, and particularly our city is in, is of greater proportions than anyone predicted.  So, instead of being at step 9 in the "decline cycle" as I expected, it seems that we are onto step 10 ("Small companies start feeling the impact of the slow economy and delay or cancel growth plans, some companies go out of business") and we are moving through the steps at a quicker rate than anticipated.
This said, I do not expect small companies to get big discounts on space until early 2009, and even then, I would not expect discounts as large as those that big users are getting.  There are several reasons for this.
1) The real estate market lags the economy (hence early next year, not now)
2) The supply of small spaces is still very low
3) The demand for small spaces has not declined significantly - this is due at least in part, to the many bankers who have been laid off by the big firms and are going off on their own starting new shops
4) An empty small space has much less impact on a landlord's cash flow statement than a large space does.  Landlords can afford to be more stubborn with their small spaces and explore their options.
So, what does this mean for you if you are a small company considering a move or looking for space? Now, is the time to start your search!  If you figure out what you want now, you'll be in a great position to take advantage of the market in a few months!
http://feeds.feedburner.com/Brokered-ThoughtsOnNycCommericalRealEstate