Urban Compass pivots slightly and receives a nice valuation. Also our CEO, Michael Mandel, is quoted. Read more below and on The Real Deal here.

Doubters say the real estate start-up won’t be able to satisfy investors, but the company’s principals are still confident 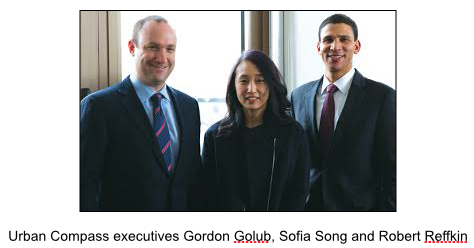 While a $150 million valuation may seem high for a company that hasn’t yet celebrated its first birthday, it’s not unusual for tech start-ups — like messaging services WhatsApp and GroupMe — to command far more than their near-term revenue potential from investors or buyers.

Still, some industry observers were dumbfounded by Urban Compass’s valuation. And that was not just because of the high-dollar figure, it was also because the company’s business model has shifted substantially since its launch last May, from a unique rental firm that undercut rival firms by offering clients lower commissions, toward a more traditional residential real estate brokerage.

That shift has some industry insiders wondering whether Urban Compass can deliver returns for its tech-focused investors while competing in a low-margin market flush with well-established brokerages.

“These guys are used to the world of outlier valuations based on projections and trends in the venture capital world,” said Anthony Lolli, CEO of residential brokerage Rapid Realty. “But in the world of real estate, it all boils down to, ‘how many deals are you really closing?’”

Real estate brokerage valuations have rarely reached the heights Urban Compass investors are seemingly betting on. Real estate holding giant NRT bought the Corcoran Group for a reported $65 million in 2001, for instance, but Corcoran was already doing yearly sales of $2.2 billion. And with the exception of a smaller deal involving Bellmarc buying A.C. Lawrence in 2012, and becoming a Coldwell Banker franchise, no other major Manhattan real estate companies have traded in more than a decade. (The purchase price on the Bellmarc deal was not publicly disclosed.)

Urban Compass executives declined to comment on the company’s dollar volume of deals or projections for profitability, but maintained that the start-up is consistently hitting the financial goals it set for its growth.

“We have raised over $33 million [in total],” Urban Compass CEO Robert Reffkin said in a recent interview with The Real Deal. “We have a tremendous amount of money in the bank and we feel very secure about our position. I’m focused on creating a multibillion dollar company, and I’m fully confident that we can do so.”

Urban Compass bounded onto the real estate scene in May 2013, generating headlines for its unconventional business model, which initially combined a StreetEasy-style listings website with a team of salaried “neighborhood specialists” who functioned much like rental brokers. But its entrepreneurial founders, Reffkin and Silicon Valley veteran Ori Allon, were also the source of much of the company’s attention.

And in addition to Kushner, Advance Publications and the Founders Fund, the company has a slew of other high-profile backers, including Goldman Sachs and venture capital company .406 Ventures, as well as CEOs like Kenneth Chenault of American Express, Cyrus Massoumi of ZocDoc and megadeveloper Bill Rudin. However, neither Rudin nor Jared Kushner currently have any units listed with Urban Compass.

While in many cases financial backers serve on a company’s board, they typically have little control over the direction a company takes, Michael Mandel, founder of tech company CompStak, told TRD.

“Most decisions don’t require board approval, and even if they do, the investors would have to control the board to control those decisions,” he said.[...]

Read the rest of the article here on The Real Deal.