The downtown FiDi submarket might not continue to retain all its tenants in the coming months. 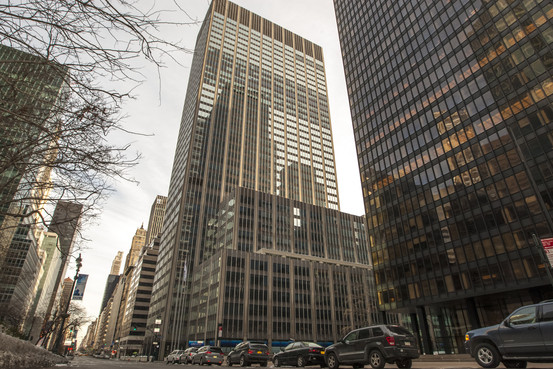 More than 50 years ago, Citibank moved from 55 Wall St. to a gleaming new office tower at 399 Park Ave. in the first wave of a migration of banks and securities firms from downtown to Midtown.

In that half-century, the bank morphed into Citigroup Inc., C -0.13% and today, the financial services giant is pulling up stakes again. And Citigroup's relocation from 399 Park is leaving some landlords along that corridor wondering about what the future holds for their office space.

Late last year, Citigroup renewed its lease through 2035 for its existing offices at 388-390 Greenwich St. The bank hasn't divulged specific plans and a spokesman declined to comment.

But its landlord at 399 Park Ave., Boston Properties, BXP +0.57% Inc. told investors late last month on an earnings call that it expected Citibank to give up all of its 350,000 square feet in the building in 2017 when its lease expires.

"There is no question that Citibank is going to be relocating out of 399 Park," Douglas Linde, Boston Properties president, said on the call.

The return of Citi to its lower Manhattan roots is part of a broader contraction of New York's big banks and securities firms that have been among New York's leading employers and office tenants. Since the recession, many large banks and financial firms have been reducing staff as they've cut costs and downsized or exited businesses in response to increased regulations. Millions of square feet that used to be occupied by such giants as J.P. Morgan Chase & Co., Bank of America Corp. and UBS AG have been put on the market.

Employment in New York City's financial and insurance industry has been declining since the downturn. In December, the sector employed 324,000 workers, down 4.7% from 2008, according to the New York State Department of Labor.

In the city's office market, this contraction is hitting parts of Midtown—Park Avenue, for example—that benefited from Wall Street's northern migration in previous decades. Last year the office vacancy rate on Park Avenue increased to 11.6% from 9.1% in the first quarter of 2013, according to Cushman & Wakefield Inc. The vacancy rate for all of Midtown rose to 11.2% from 10.1% in the same period.

Citigroup's decision to move is "disconcerting," said Anthony Westreich, chairman and CEO of Monday Properties, which owns 230 Park Ave. "In the Park Avenue corridor certainly financial service firms have been dominant in this market place."

To be sure, Park Avenue hasn't lost the cachet that has made it one of the most sought-after office addresses in the world. Such big names as Blackstone Group L.P., J.P. Morgan Chase & Co., Colgate-Palmolive Co. and the National Football League have offices there.

"In the past year, none of the most valuable leases—calculated using size, effective rent, and term—was on Park Avenue," said Noam Shahar, research director at CompStak, a real-estate data service firm.

Citigroup's decision to move from 399 Park comes at a time of a public debate over whether special zoning incentives are needed around Grand Central Terminal, including Park Avenue, to ensure the area keeps its status of one of the world's leading business districts. Despite efforts by the outgoing Bloomberg administration to promote the rezoning, it stalled last year.

Mayor Bill de Blasio has said he supports rezoning the area but wants to take more time working out issues such as the improvement of infrastructure to handle more people in the area and the pricing of development rights. Before taking office in January, he pledged to offer a revised plan by the end of this year.

Some developers are moving ahead with plans. David Levinson plans to build a 650,000-square-foot office building at 425 Park Ave., which would be the first new office building construction along the corridor in decades. He hopes to begin construction next year after all the existing leases expire.

Other Park Avenue landlords are hoping to raise rents by upgrading space. SL Green Realty Corp., for example, has invested $135 million in 280 Park Ave. The landlord has leased more than 200,000 square feet of space at rents that are "easily 50% higher than they were prior to the renovation," said Steven M. Durels, executive vice president at SL Green Realty.

RXR Realty is spending more than $40 million for upgrades to 237 Park Ave. that include a new lobby and new lighting in the wake of Hachette Book Group's decision to move out of 120,000 square feet for another Midtown location. "These are not functionally obsolete buildings," said William Elder, RXR Realty executive vice president.

Boston Properties bought 399 Park, Citi's current headquarters, from the financial giant for $1.06 billion in 2002. At the time, Citi occupied about 40% of the building's 1.7 million square feet of space. But over the years, Citi's use of the space has declined and it has sublet a large portion of it.

This isn't the first time Boston Properties has faced the challenge of filling a large block of space in 399 Park. After Lehman Brothers Holdings Inc. went bust in 2008, the landlord had to lease more than 400,000 square feet vacated by the investment bank. Boston Properties succeeded but had to take lower rents in some cases.

Citi also has a large block of space at 601 Lexington Ave., which also is owned by Boston Properties. On the conference call, Mr. Linde said the landlord is "going to have conversations with them about whether or not they want to use that space."

Corrections & Amplifications
Citigroup Inc. late last year renewed its lease at 388-390 Greenwich St. through 2035. The bank's landlord said Citigroup would move its headquarters there. A story in the Monday, Feb. 10 Greater New York section incorrectly said that Citigroup announced that it would consolidate its New York operations at 388-390 Greenwich St. Additionally, in an earlier version of this article, a photo incorrectly showed 390 Park Avenue, not 399 Park Avenue as indicated in caption.