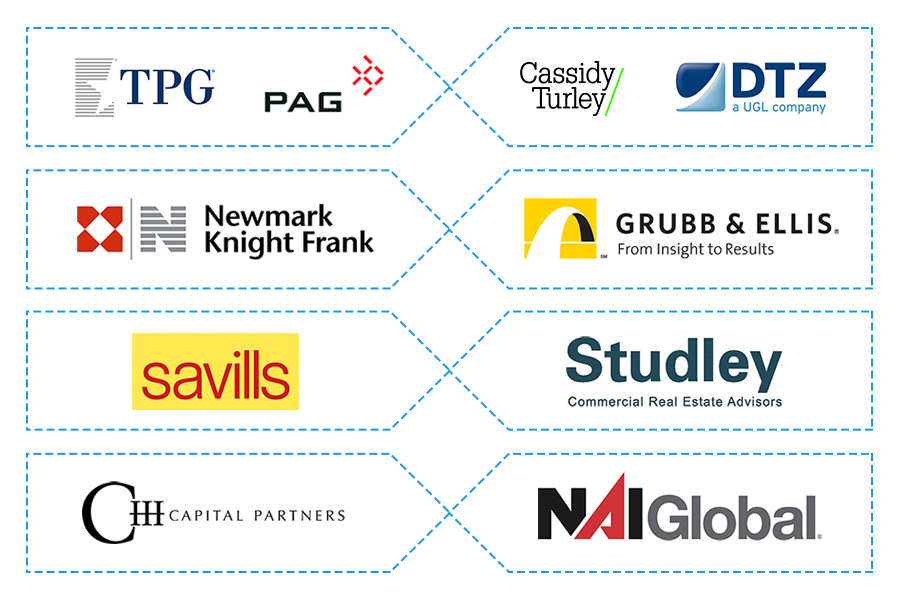 The recent DTZ - Cassidy Turley merger made us think about other notable mergers and acquisitions in CRE over the past few years. We bring you a brief history of some of these industry-shaking transactions

Here are some takeaways from these notable M&A’s:

Details:
TPG Capital, PAG Asia Capital, and Ontario Teachers Pension Plan acquired DTZ from UGL for $1.1B, and have just completed the acquisition of Cassidy Turley. Chicago-based DTZ, is an international property services company with over 24,000 employees and 208 offices in 52 countries. In the US, DTZ has mostly focused on tenant representation. On the other hand, the Washington, DC based Cassidy Turley has a more substantial landlord agency business with 4,000 professionals in 60 US offices.

A bit of History
DTZ’s origins can be traced back to the UK in the 18th century, but the DTZ brand was born in 1993, when the company expanded to Europe. DTZ grew its US operations between 2006 and present, before being acquired by UGL Limited</a href> in 2011.
Cassidy Turley was established in 2008 when four firms from the Colliers International network merged to form a new entity. The company expanded to 60 US offices through a series of mergers and acquisitions between 2010 and 2013.

The takeaway
The combined company will be the third largest property services company in the US, after CBRE and JLL. Prepare for more services offered in all combined US locations, especially the major markets, as well as aggressive hiring.

When:
The sale was announced in May 2014 and closed later that month
Details:
NYC based Studley has 400 brokers and 175 support staff, who mainly focus on office tenant representation. London based Savills, with 600 locations and 27,000 employees in Europe, Asia Pacific and the Middle East, did not have a US presence prior to the acquisition, despite its wider range of commercial real estate services. Savills purchased Studley for $260M, half of which was in promissory notes, and the other half in cash and Savills shares.

A bit of History
Studley was founded in 1954, and was famous for publishing a NYC office availability survey in the 1960’s. In 2002, eight partners sold a controlling interest to the firm’s managers and brokers for $20M.
Savills has a longer history - it was established in London in 1855 and was listed on the London Stock Exchange in 1988. In the late nineties, the firm expanded its operations in Asia and several European countries through several mergers and acquisitions.

The takeaway
Savills’ business is strong in Europe and Asia, and the Studley acquisition is part of a plan to enter the US market. While Studley’s main focus is tenant representation, as well as some capital markets activity, the combined Savills-Studley will be able to offer additional services, such as valuation, property management and investment advisory across the US. According to this article,</a href> the merger with Savills gives Studley the leverage to acquire clients who prefer brokers with a strong international presence, as well as access to international investors looking to sell property in the US.

A bit of History
Newmark was founded in Manhattan in 1929, but it wasn’t until 2000 when the company started to expand nationally. A 2006 merger with London-based Knight Frank created a global company, which continued to grow until its acquisition by BGC Partners. At the time of the BCG deal, Newmark had 26 US locations and 425 brokers.

Grubb & Ellis was founded in 1958 in San Francisco, and over 50 years, grew its footprint to over 100 US offices and 5,000 professionals. In the 1980’s Grubb was listed on the NYSE and became the third largest CRE brokerage in the US. At its peak, the company managed over 300 million square feet. The company began to seriously struggle after the 2008 financial crisis. In the years leading up to its acquisition, Grubb hemorrhaged brokers. Around this time C-III Capital partners, who ended up acquiring NAI, was also looking into Grubb, but it never committed to buying it. Eventually, Grubb filed for Chapter 11 bankruptcy as part of the arrangement to sell its assets to BGC. Many of those Grubb brokers who did not join BGC and Newmark, ended up in Lee & Associates and Avison Young.

The takeaway
Grubb & Ellis was once the third largest US brokerage, and eventually went bankrupt, proving that in the ever-changing world of CRE brokerage, no firm, no matter how large, can rest on its laurels. Following the acquisition, NGKF jumped to number 5 on NREI’s list of the top 25 brokerages, and in 2013 it leapfrogged Colliers to reach fourth.</a href>

Details:
C-III Capital Partners, is an Irving, TX based conglomerate focused on CRE investment, loan origination, and servicing. One of its subsidiaries, C-III Asset Management, services commercial real estate loan portfolio of over $130B. C-III acquired Princeton-based NAI Global, which at the time had had 350 offices and 5,000 brokers. The financial details of the transaction were never disclosed.

A bit of History
C-III’s CEO Andrew Farkas is the original founder of Insignia Financial Group, which in the 1990’s became the largest owner operator of multifamily properties in the US. Insignia was purchased by CBRE in 2003, and Farkas proceeded to create Island Capital Group, a merchant bank which is the controlling parent company of C-III.

NAI started in the late 1970’s in Orlando, Florida, when Gerald Finn executed his vision of a national brokerage. In 10 years, the network grew to 120 member offices, and by the mid 2000’s, NAI expanded to 40 countries.

The takeaway
The acquisition gave NAI Global credible NYC-based capital, feeding more business to its member offices. In the years following the acquisition, NAI global has grown to over 6,500 professionals and 378 locations. NAI just recently announced</a href> that NY based EVO Real Estate Group has joined the network. Expect NAI Global to look for additional acquisitions in markets where it does not have a strong presence.

What’s in the pipeline?

Three senior NYC brokers sat down with CompStak and shared their best advice for rookie brokers. Now we want to pass it on to you. Don’t do it Steve Santoro, a Principal at Cresa New York, warns to carefully weigh the risks of

We spoke to brokers—from junior to veteran—and asked them what kinds of people made life difficult for them. From vendors and tenants to colleagues, here are the six people brokers prefer to avoid: Pushy Service Providers While service providers can create lots